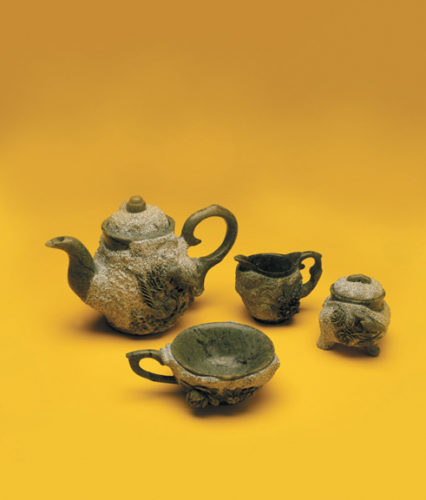 1. Used as a friendly form of address, especially to a young girl or woman. “all right then, flower?”. 2. The seed-bearing part of a plant, consisting of reproductive organs (stamens and carpels) that are typically surrounded by a brightly coloured corolla (petals) and a green calyx (sepals). “the shrub produces blue flowers in early summer”. 3. The finest individuals out of a number of people or things. “he wasted the flower of French youth on his dreams of empire”. 4. Be in or reach an optimum stage of development; develop fully and richly. “she flowered into as striking a beauty as her mother”.

Origin: Middle English flour, from Old French flour, flor, from Latin flos, flor- . The original spelling was no longer in use by the late 17th century except in its specialised sense ‘ground grain’ (see flour).

4044 Detail of embroidery on the Cleaning Beauty gloves, 2007

3052 Overview of the catwalk design for Jean Paul Gaultier, 2003